Blepharitis is one of the most common eye disorders in the UK, but what exactly is it?

Blepharitis is characterised by inflammation (redness) of the eyelid margins. In most cases it also causes the eyes to become sore (especially in the morning) along with itching and irritation of the eyelids.

Due to its recurring nature, many people who suffer from Blepharitis often confuse it with conjunctivitis. GPs also often mistake Blepharitis with dry eye because of the gritty, sore sensation that comes with blepharitis.

Symptoms are generally noticeable when you first wake up and feel progressively better as the day goes on. Redness of the eyelid edges tends to be persistent throughout the day. 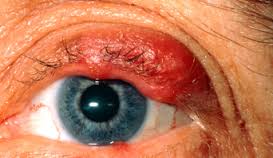 There are two main forms of Blepharitis – Anterior and Posterior.  Anterior Blepharitis affects the outside of the eyelid where the eyelashes are attached.

The two main causes of Anterior Blepharitis is Seborrhea and Staphylococcus.

Seborrhea blepharitis is the most common type of blepharitis and is caused by improper function of the oil glands that line the eyelid. This causes waxy, greasy scales to build up on the eyelid margins. Hormones, stress and nutrition can exacerbate Seborrhea.

The main symptomsof Seborrhea Blepharitis are chronic redness along the eyelid margins and crusting around the eyelid in the mornings.

Staphylococcus  (Staph) Blepharitis is caused by bacteria. It is often contracted during childhood and can continue throughout adulthood. It usually presents itself in a similar manner to seborrhea but is less common .

This type causes problems with the inner eyelid (the part that makes contact with the eyeball) and is causes by dysfunctioning meibomian glands (oil glands).

Posterior blepharitis can be causes by  acnea rosacea or seborrheic dermatitis. Meibomian glands are oil glands which are located in the upper and lower eyelids.

They produce an oily substance which is an important factor in normal tear film.  If your oil glands are dysfunctional they tend to produce too much oil. The tear film then becomes unstable resulting in red, irritated eyes.

Symptoms include red eyelid margins, diluted blood vessels in the whites of the eye and persistent irritation.

Blepharitis is stubborn and requires systematic, on-going treatment.  As someone who used to suffer, I understand the frustration of waking up every morning, just to see your eyelids are STILL red.

Despite scrubbing them with baby shampoo, as recommended by your doctor!

Blepharitis can be described as chronic due to its persistent nature. Treatment needs to be on-going to not only eliminate redness and irritation but to stave off any more Blepharitis ‘outbreaks’.   Alleviating red eye lid margins and soreness will not only prevent future infection but will also reduce the chances of scarring the cornea.

For many people, myself included, Blepharitis is not only uncomfortable but can have real effect on self-confidence.

I have tried every lid scrub, eye drop and compress known to man in my quest to eliminate Blepharitis. I have tried baby shampoo and sodium barcarbonate, as recommended by the doctor, only to find my eye lids were just as red as before.

Treatment for Blepharitis isn’t as clear cut as keeping your eyelids clean – it requires a multi-pronged approach.

For more information check out my Blepharitis Treatment Guide